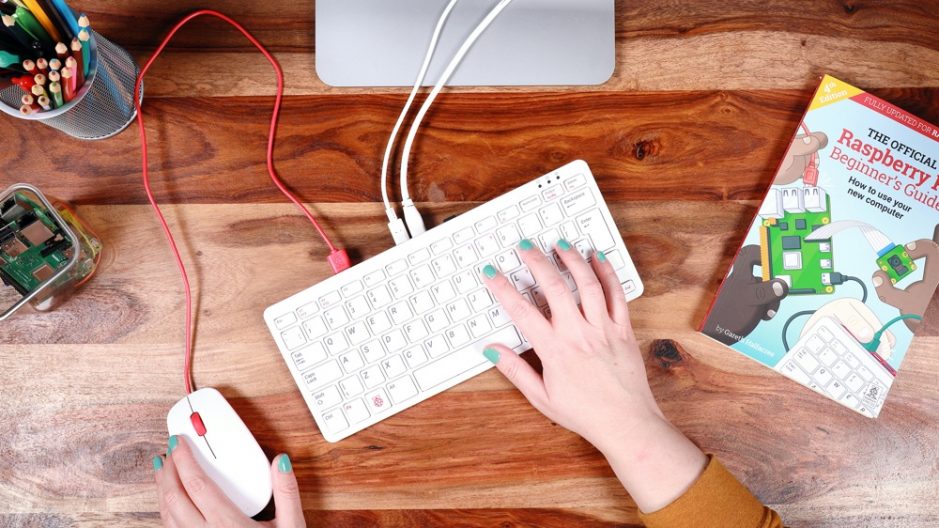 The Raspberry Pi 400 has just been released, a computer IN a keyboard for 70 €!

The foundation has just announced, as usual unexpectedly, the release today of a new version of the Raspberry Pi, the Raspberry Pi 400, which is fundamentally different from its predecessors!

Let’s take a look at what this new machine has to offer, what’s in it, who it’s for and, of course, where you can buy it.

Where to buy the Raspberry Pi 400?

Let’s start with the point that interests many of you: where to buy the Raspberry Pi 400.

The Raspberry Pi 400 is currently sold in two different offerings:

Currently the Raspberry Pi 400 is not yet available everywhere on Amazon, but it should happen very quickly!

The Raspberry Pi 400, a computer in a keyboard!

If you’ve known the 80s and the famous Commodore 64, prepare for a wave of memories with this Pi 400.

Indeed, like the computers of the 80s, this new Raspberry is a computer directly integrated into the keyboard!

Yes, you read and saw that correctly, a complete computer in a keyboard, whithout the screen obviously.

A good idea is never too old to be borrowed.

Far from hiding its influences, the foundation claims its inspiration loud and clear, explicitly citing in its blog article the machines “BBC Micros, ZX Spectrums and Commodore Amigas”.

But, if the foundation was inspired by these old PCs, it is not only out of nostalgia, but above all for the practical aspect, which is not only a question of power, but also a question of appearance, of handling, and particularly in the case of the Raspberry, of bulk.

With this new Raspberry Pi 400, no more cases, cables all over the place on the desk, etc. A power cable, a cable for the screen, if necessary a cable for the mouse, all directly from the keyboard.

The GPIO ports are of course kept and easily accessible on the face of the keyboard dedicated to connectors.

The shape of the Raspberry Pi 4 has also been completely redesigned to accommodate this new format, as shown by this image of the foundation.

Another difference, thanks to its less compact shape and the use of integrated heat sinks (the gray part of the image above), this Raspberry Pi 400 should heat much less than the Raspberry Pi 4, which seems to confirm the tests by François from the site framboise314.fr.

Finally, who is this Raspberry Pi 400 for?

With this new model, the foundation contrasts radically with its historical approach that was not very oriented towards user experience, at least at the physical level.

The Raspberry Pi 400 should therefore make an excellent Christmas present, as suggested by the foundation, which speaks of the complete kit for the Raspberry Pi 400 as the perfect “Christmas morning” product, with everything in the box, Pi 400, cables, official mouse, power supply, pre-installed SD card, the official beginner’s guide, etc. All you have to do is connect to your screen or your TV!

Good thing, because this year Christmas is likely to happen indoors: /.

Beyond children, this new Raspberry Pi could well interest two other audiences:

From our side we do not hide it from you, this product really seduced us and will totally find its place on our desk!